The organizers of User Experience Lisbon have kindly invited me to come to Portugal next May (11-13), to teach a Designing Social Interfaces workshop.

It looks like I’ll be in good company (this are just the folks they’ve announced so far): 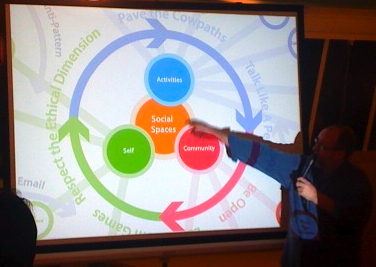 A week or so ago I undertook a whirlwind visit to the UK and the Continent, giving two presentations about design patterns and social design, one in London on Tuesday, and another in Berlin on Thursday, each event sponsored by YDN (and the one in Germany co-sponsored by the local IxDA group).

The London event was in a wonderful gallery/cafe venue called Wallacespace filled with a standing-room only crowd. I was pleased to see a couple of friends from the international UX community there and the audience as a whole was wonderful, attentive, and ready with interesting, challenging questions for me when I was done.

Afterward we ate some snacks and drank some beers courtesy of YDN, before heading over to a nearby pub for more beers and conversation. This was my first time back in London in fourteen years and I was impressed by the vibrancy of the web-design community in what may be the “capital” of the Web in Europe.

The next day I headed to Berlin, where a pal picked me up at the airport and helped me get settled in my hotel in Alexanderplatz. It’s actually been 20 years since I was in Berlin! Back then, the Wall had only recently been dismantled and the east was frozen in a sort of time capsule due to economic stagnation. A lot has happened since Berlin reunited and resumed its role as the capital of Germany and arts mecca of Mitteleuropa. In fact, there was a fashion convention going on during my visit, so the airport and hotel were full of people who made me feel, in comparison, more like a geek than a designer.

East Berlin is now full of trendy gentrified neighborhoods. I had lunch at a burrito place (!) called Dolores that’s decorated with maps of the Mission in San Francisco. Clearly the internet-savvy crowd in Berlin feels a kinship with our own community in the Bay Area.

Berlin is also the home of a thriving local Interaction Design Association (IxDA) group, which helped secure the venue for my talk–(Newthinking Store) and helped promote and publicize my talk. I had a chance to meet some longtime virtual acquaintances from the IxD and IA communities in Berlin, such as Jan Jursa, of IATV and the Berlin IA Cocktail Hour.

The Berlin talk was also full, and again I was blessed with a generous and attentive crowd. More great questions. (We did the whole evening in English. Try as I might to speak slowly, I still probably spoke a bit too fast at times but just about all the German I know is noch ein Bier, bitte so it’s just as well.)

One interesting difference between the two groups is that the folks in Berlin asked me more process questions: How was the social design project organized? How did the wiki figure into the writing of the book? What’s an unbook? and so on. The questions in London tended to be more about the efficacy of design patterns in general and the application of social design patterns.

At both sessions, certain attendees had reached out to me in advance over Twitter and proposed questions that they had a chance to ask at the events. In London and again in Berlin I was asked the perennial question about whether the use of design patterns stifles innovation. My traditional answer, “No. Now shut up and do your wireframes!” got a laugh in both settings as well. (My real answer: “Not if they are applied as guidelines and with sensitivity to context.”)

One other curious difference between the two events was that the audience in London had nearly perfect gender balance, whereas the one in Berlin was, by my estimate, about 90% male. I’d like to learn more about what the differences are between the web design and development communities in the two cities that might account for that variance.

I’d like to thank YDN for sponsoring the trip, and O’Reilly Media for providing logistical support (and some copies of the book to give away as rewards for great questions). Interested folks can see my slides on Slideshare:

Several attendees in London took great notes of my talk and published them on their blogs or personal websites, including Jeff Van Campen, Suw Charman-Anderson, Michael Mahemoff, and O’Reilly’s Craig Smith.